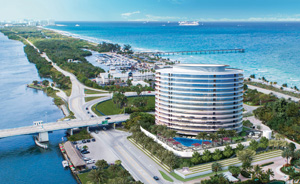 The Miami real estate market is so hot it’s almost overheated. This has caused some developers to migrate north and make waves in classic beach towns like Hollywood. The charming, coastal neighborhood of Hollywood Beach has become a hotbed for new development with the announcement of Oceanbleau, the 22nd project in the zone since 2011. The 17-story, 47-unit circular-shaped luxury boutique condo is joined by the construction cranes at the lavish Melia Costa Hollywood Beach Resort, a 304-room condo/hotel with resort-like amenities, and the laid back indulgence of the Jimmy-Buffet inspired Margaritaville Resort opening this Summer. For those who want the vibrancy of downtown living, H3 Hollywood is a 15-story, 247-uniti urban retreat in the heart of the Hollywood renaissance.