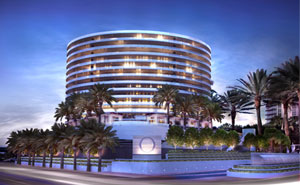 There’s a new development hot spot in South Florida—and it’s outside Miami.
On about a four-mile stretch of beach in Hollywood and Hallandale Beach, developers are pumping hundreds of millions into dazzling hotel condominiums and residences with seven-figure price tags.
Developers like the Related Group are spending more than $100 million to bring hundreds of luxury units to beachfront projects like Beachwalk and Apogee, which will add 124 condos and 583 resort units by the end of 2016.
“Hollywood Beach is a highly unique and very special stretch of pristine oceanfront which offers a multitude of options that are challenging to find in other beachfront communities,” said developer Ryan Weisfisch, managing partner of Aventura-based Maxwelle Real Estate Group.

His new project, Oceanbleau, is set to break ground in October just off the Hollywood Beach boardwalk. The 17-story development offers 48 condos on a 2-acre beachfront site surrounded by bike trails and its key selling point: about 2,000 acres of parks.
“You get all the benefits of Hollywood Beach and its surrounding areas—all the restaurants, the entertainment, the culture—but you also get the benefit of … views because you’re surrounded by parks,” Weisfisch said.
While developers in Miami have to eke out space in a crowded landscape, their counterparts further north pitch premium real estate in less densely built submarkets with easy access to multiple airports, entertainment, shopping and major thoroughfares connecting Broward to Miami-Dade and Palm Beach counties.
Oceanbleau developers say theirs will be the last tower permitted on the northern tip of the beach dominated by parks. They haven’t priced the four penthouses, but other units range from $1.6 million to $3 million for up to 3,000 square feet of interior space and 1,144 square feet of terraces. The project is expected to sell out at more than $100 million by its January 2017 delivery date.
“I believe in Hollywood. It has beautiful beaches, beautiful parks, and you really feel like you’re on vacation,” said Moses Bensusan, a Canadian developer credited with creating about 3 million square feet of mixed-use real estate in the last two decades. “I would be the last to invest in Brickell because it feels more like a commercial area.

Bensusan’s project, Melia Costa Hollywood Beach Resort, is set for completion by year-end on five acres spanning two blocks along North Ocean Drive from State Road A1A to the beach.
The project will feature 307 condos in two towers, about 40,000 square feet of street-level retail and a hotel condo by Melia Hotels International, the largest hotel chain in Spain and one of the largest resort operators in the world.
“The market in Hollywood used to be very Canadian about 10 years ago, but now it’s changed completely,” Bensusan said. “We have a lot of high-end buyers from Brazil, Argentina, Russia. The market is very attractive to them.”